Elena Delle Donne, the newly anointed most valuable player of the WNBA, does a lot of things very well. On the side that she is one of the most beautiful girls in the WNBA, she also know how to shoot that ball. We all know that WNBA is not that famous as the NBA, but we must say that she is one of the best basketball player that ever lived. She is amazing especially in this one category, not always associated with most valuable players: free throw shooting.

Delle Donne, led the league in both free throws and free throw percentage, making 207 of 218 shots for 95 percent, including a streak of 58 in a row. She is the first W.N.B.A. M.V.P. to lead in that category. To someone who don’t know that much about basketball, this is just regular statistics with some numbers, but… 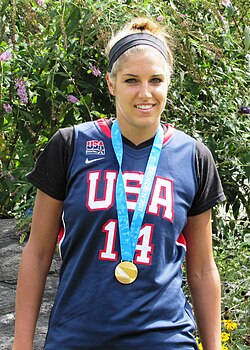 Accurate free throw shooting and superstar do not always go together. An NBA MVP has led in free throw percentage only six times (The others are Steve Nash, Magic Johnson, Larry Bird (twice). Oscar Robertson and Steph Curry.)

What is important to say is that free throw line is the same. 15ft distance from hoop, for them all.

In general, WNBA players are strong free throw shooters. The league leaders have shot better than their male counterparts in nine of the last 10 seasons. Delle Donne’s 95 percent this season topped Curry’s 91.4 percent.

Over three seasons in the league, Delle Donne is 448 for 477 for 94 percent in 77 games, about the length of an N.B.A. schedule. No N.B.A. player with 400 attempts in a season has matched that percentage. Second one on that list would be one of the greatest NBA shooters ever, Peja Stojakovic, with nearly 93 percent.

As a rookie in 2013, the 6-foot-5 Delle Donne joined a team that had never had a winning record and helped it get to the playoffs. Last season, the Sky made the finals, losing to the Phoenix Mercury.

“A W.N.B.A. championship is by far the biggest goal.” Delle Donne said.

I hope she will make it!